Patch me up please, I'm struggling!


Just kidding, I'm feeling AMAZING lately because of these amazing little guys! Seriously, I am obsessed with them, especially the Pain Patches. We were all excited for our order from The Good Patch to arrive, especially the CBD version, but were also understandably skeptical. Could a non-pharmaceutical all natural plant-based patch actually work to ease a hangover or late night or CRAMPS!!?  I'd worn a transdermal birth control patch in the past, so I understood the gist and knew that transdermal patches worked (no baby!) but would these actually work?


In my experience? ABSOLUTELY!!


I have been lucky enough to not need the Hangover or Period patches yet, but we all know they're just sitting on my bathroom counter awaiting their inevitable moment of glory. I have, however, tried the CBD and Natural Nite Nite, and the Natural Pain Patches with pleasant results. 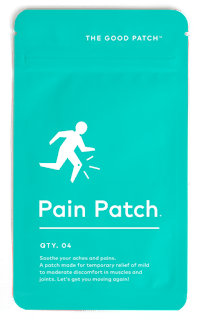 
I am training for a race to honor my sister in April so after my first day of real training, I was SORE. Like, breathe too quickly without thinking about it and it hurts sore! I will admit that I was extremely skeptical that the Pain Patch could do anything to quell the pain that Ibuprofen wasn't touching so I  was ecstatic to discover that they are freaking MAGIC compared to those ugly brown tablets! Within 10-15 min of first applying the patch, I started noticing a change and by an hour in, I was sold. My pain was all but gone! There was still some stiffness and soreness but what I noticed more than anything was that when I went to move or bend or do anything, it was the absence of the pain. It was like my brain was anticipating the soreness and then was surprised when the pain never "hit." The other thing that I was amazed by was that it ended up cutting my recovery time down to a day and a half instead of the 2-3 days of recovery that I typically feel when starting a new workout. No "the second day is always worse" moments! See ya pain! 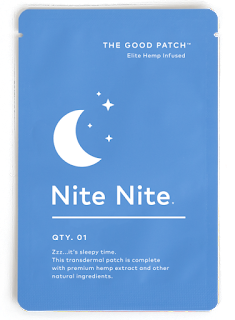 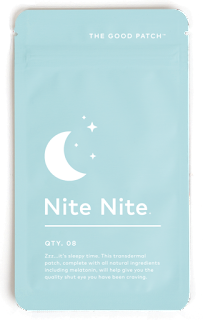 
*Before my review, please keep in mind that my sleep troubles are on the extreme and attached to my emotional loss so would not qualify my experience as "typical" and would expect anyone else to have an even more pleasant experience.


I have been experiencing a lot of difficulty sleeping in the last month after the loss of my sister last month, so I was hopeful the Nite Nite patches would assist me in getting some quality rest. While the effects are not as potently felt as the Pain Patch, likely because most of the effects take place while asleep, I could definitely feel both patches "kick in" and make falling asleep much quicker and easier. While I still woke up throughout the night on the Natural Nite Nite patch, my overall sleep experience was more restful than a typical night. The CBD Nite Nite, however, kept me sound asleep throughout the night and I awoke feeling fully rested and not drowsy.  I'll call it a win. I would expect that on someone else the experience would be even more relaxing. 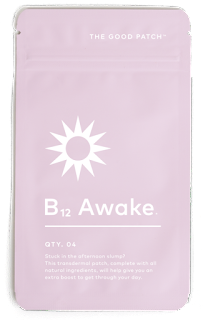 
So, I haven't tried this one yet BUT we did have one of our shopgirls try it out on a day that she was particularly sluggish and distracted and Haley and I could notice a difference in her energy level and productivity within 20 minutes! If only we could slip one on all our shopgirls every shift... 😜

Firstly, what the heck is CBD and what does it do?

CBD - short for cannabidiol - is a plant compound found in many nutritious vegetables including kale, broccoli, and echinacea and is most abundantly found in hemp. It is known to be a natural anti-inflammatory, analgesic, antioxidant, and is neuroprotectant and known to have anti-depression and anti-anxiety properties.


When ingested in concentrated form, CBD is known to promote balance and tranquility and has been known to alleviate symptoms of anxiety, pain, and insomnia. Its benefits increase with regular use and it DOES NOT get you "high."


The endocannabinoid system (ECS) is a biological system composed of endocannabinoids that maintain the body's internal homeostasis. CBD works like a key to unlock the ECS. When ingested, it adheres to ECS receptors found throughout the body, resulting in whole body wellness.

So, why a patch instead of a pill?

Transdermal patches offer a quick and discreet way to optimize the absorption of hemp and other plant extracts into the body over the course of a 12 hour day and also increases bioavailability by bypassing the first-pass effect of your metabolism via the digestive system. It also allows for prolonged release of a lower peak drug concentration with fewer side effects* in general.


*None of us have noticed ANY side effects when wearing the patches but The Good Patch's website mentions that occasionally dry mouth or drowsiness has been reported.

We also carry the non-CBD plant-based patches (and they're cheaper!)  They are available in Hangover, Pain, B12 Awake, and Nite Nite and each comes with four patches, while Nite Nite contains eight, compared to the single patch CBD versions!


*Disclaimer: These are our experiences and the facts presented by The Good Patch only and these statements have not been evaluated by the Food and Drug Administration. This product is not intended to diagnose, treat, cure, or prevent any disease. All products containing .3% or less THC are legal to sell in all 50 states.